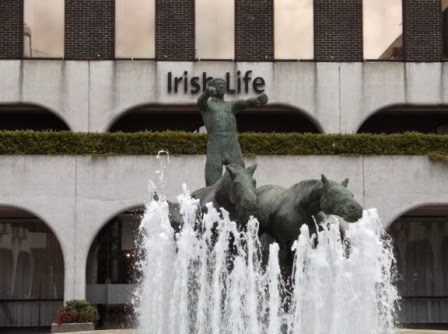 I finally made it to Ireland, land of my mother's ancestors (Vaughan and Kurtz or Curts). I didn't make it all the way to the western part of Counties Cork and Clare, but did go south through Cork City to Cobh, and got a feel for the countryside.

I also spent 1 1/2 days wandering Dublin. I saw the Book of Kells behind glass in a very dark room, followed by the Long Hall (special collections) at Trinity College. 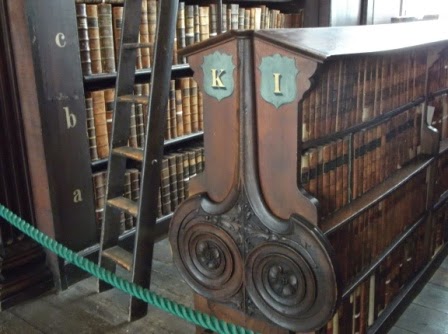 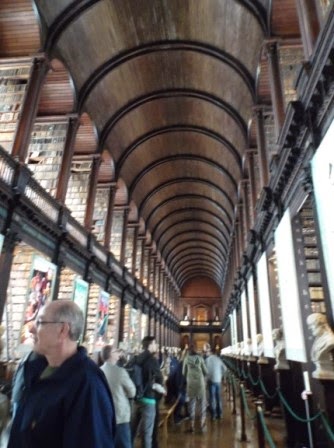 Then I visited the 'real' library and chatted with the Duty (Reference) librarian. They close the desk for 1 1/2 hours at lunchtime, and only staff it until 7 pm. No online reference, except that he sometimes answers quick questions via Facebook and twitter. He is kept pretty busy helping students at the desk. The library is much like a US university library in an older building, but unlike Duke they are pretty strict about talking, food and drink, and photos. There is a security guard at each entrance.


On the last day in Dublin I walked a long ways through regular folks' neighborhoods to the Glasnevin cemetery, Dublin's first Catholic cemetery and final resting place of Michael Collins and other rebels. It was filled to the brim with beautiful monuments and headstones, plus a very touching 'Old Angels' green space where the poor and babies were once buried in unmarked graves. It is surrounded now by engraved markers and mementos of babies who died in the 1950s and 1960s. 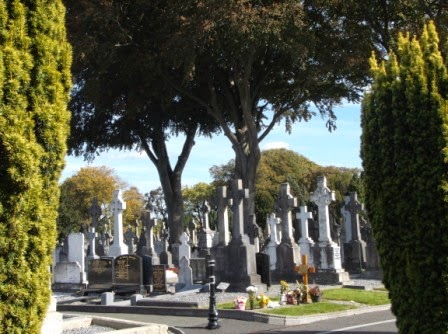 Cobh ("cove") is a beautiful little seaport on the southern end of Ireland, built into a steep hill. It was the point of departure for many fleeing the potato famine, and the last port the Titanic stopped in. They have a Heritage exhibit that's very good at evoking the sights and sounds of those days. It was also a luxury for me to stay in a hotel room with a great view, free WiFi, and a bathtub! I got to Skype with my son Jake for the first time since leaving the US on August 19. 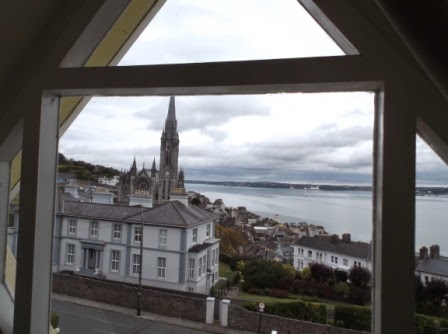 I realize that I spent most of my time talking with locals and tourists from other countries, rather than visiting the sights. I listened to trad jam sessions; had Jameson's whiskey, Smithwicks ale, seafood chowder, brown bread, and fish and chips; met local librarians, a bartender, a family with the last name Faughan (not related to Vaughan), tourists from South Africa and Australia, and an old Irishman taking advantage of the free public transportation for pensioners to ride the train to Dublin for a lecture on Byron. Many times on the tram or streets, I heard people speaking Gaelic which has a nice slushy sound. All the signs are in both Gaelic and English, but I cannot understand how they get 'Smithfield' from something like 'Margedh Faerme.'

On the last day, riding the top of the double decker bus back from the cemetery, I saw hordes of people dressed in the jerseys of either Tipperary or Kilkenny for the All-Ireland hurling championship. A man told me that it's the Super Bowl of Ireland, and we must root for Tipperary, the underdogs. (Later I found that some Vaughans used to live in Tipperary.) Alas, Kilkenny won again.

Every Irish person I met was friendly and tried to be helpful. It was a degree beyond the courtesy shown tourists in the other countries we've visited. But there was also some blatant prejudice voiced in jokes about immigrants and Scots. I guess there's that kind in every country, including the US, who fear and hate those who are different. My ancestors were probably farmers, just regular people, with their faults as well as points of pride. 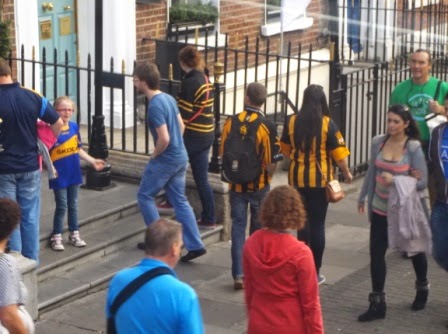 There are so many things to see and do in each port, including leaving that city to explore more interesting ones in the area. From , people went to , , , , even . And from our most recent site, LeHavre, there is of course Paris as well as Giverny, Honfleur, the D-Day beaches of , etc.

I am learning to make peace with my choices and the impossibility of doing it all, or anywhere close to it. It also strikes me that we spend so much time taking pictures to document our presence at a place, that we don't really experience it. The students bent over phones, sending their selfies immediately into cyberspace, are the extreme example of missing out on real life, but aren't we all distracted and not present to some degree? I realized how addicted I was to taking pictures when my camera battery died in the middle of Monet's gardens. Deep breath, and then I could see more colors and details, and feel the atmosphere. And of course I bought a photo book to remember the big picture : )

I've heard an ugly American tourist complaining because no photos were allowed in the Musee de L'Orangerie, where due to just this rule you can sit in blissful peace surrounded by Monet water lily murals. And I've heard of a complaint that the one-minute Hawaiian chant performed only on the first morning in each port spoiled someone's video of the view of the harbor. Don't we (including myself, often guilty) realize that postcard views aren't reality? What about your own, real experience, with all its quirks and frustrations and perceived flaws, and laughing them off? Why not embrace and record that? Isn't that what you want to remember?

So, once again, I will share a random assortment of imperfect photos. I had about 7 hours in Paris, and here is what I did:
So that was my Paris experience, and I'm happy with it. I also took a tour of Monet's gardens and house in Giverny, and we stopped in Honfleur on the way back. Did you know that the founder of Quebec came from Honfleur? (bonjour Jean-Pierre!) 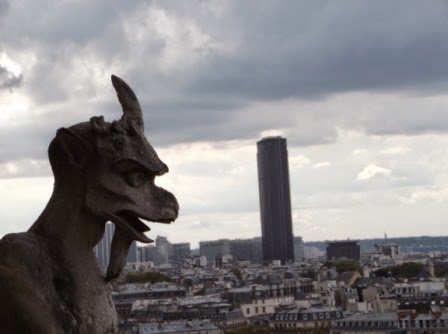 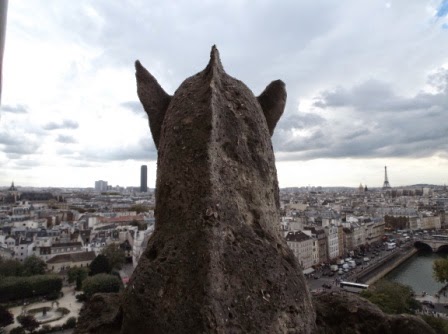 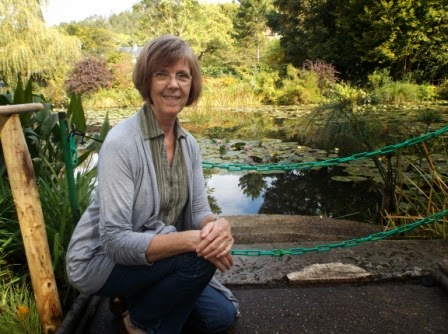 Posted by CatherineWithC at 2:30 AM No comments:

not so intrepid traveling

I was talking to a fellow voyager this morning, as we watched the ship pull away from Antwerp, about choices of what to see in each port. She said an experienced traveler had suggested that the most treasured memories were not of seeing the big sights that you can see in a book. I was glad she said that, as I was feeling somewhat guilty and disappointed in myself for not meeting the general expectations of seeing the Rubens House, the medieval castle, etc.

Antwerp was sort of a housekeeping stop for me. I got my hair cut and found the Carrefour grocery store underground at the tram stop, each a minor challenge when dealing with signs and people speaking Dutch almost exclusively. (Now my cabin is stocked with the essentials: Coke, granola bars, and Activia yogurt in a great coconut flavor.) I did take a wonderful day tour of Bruges, including a canal boat ride; but other than that I mostly hung out in Antwerp, walked around, and found other SAS people to try the local frites, beer, and chocolates with.

Best of all, I came upon a musician in the heart of tourist territory, the historic center of Antwerp, who was *not* playing American music. In every other city we have been surrounded by familiar music you can hear on American radio. Even the Antwerp cathedral bells played 'Let It Be' as I took a picture of one of the ubiquitous madonnas on a building corner. Here was a guy singing Dutch and French original songs. Alas, they weren't his, and he didn't have a CD, but he wrote down some names of songwriters and directed me to a store where I could find their CDs under the genre Kleinkunst. I now have 'het beste van' compilation of Boudewijn de Groot.

I took lots of pictures, including gorgeous architecture and art -- did you know there's a Michelangelo sculpture in a Bruges church? -- but today I'll share some of the lesser known sights I experienced. 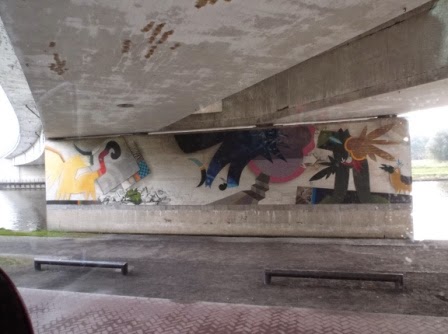 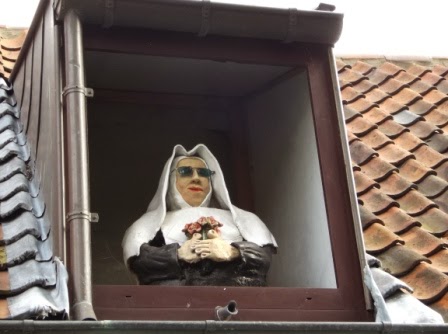 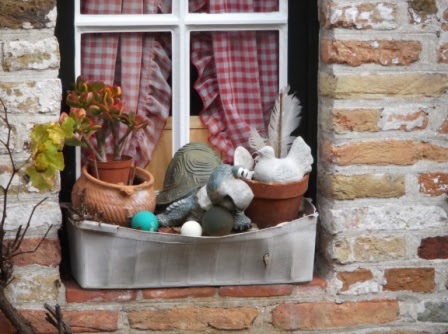 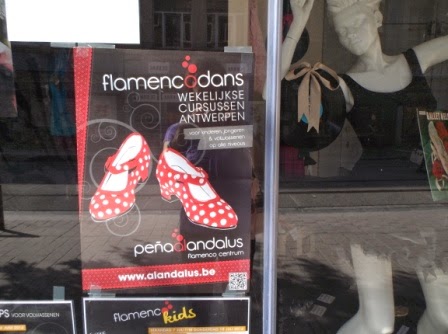 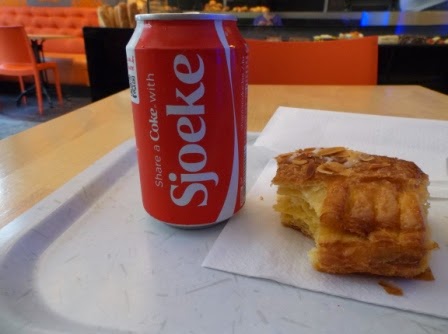 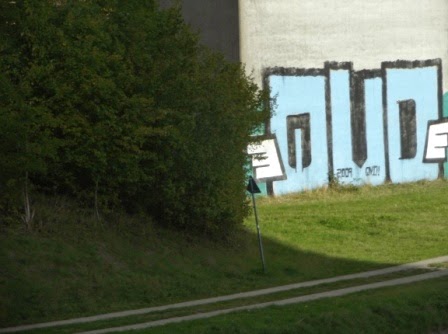 Posted by CatherineWithC at 8:36 AM No comments:

Some pictures at last

Pictures! While I can! Sitting in a covered area just outside the ship in Antwerpen, with free WiFi. 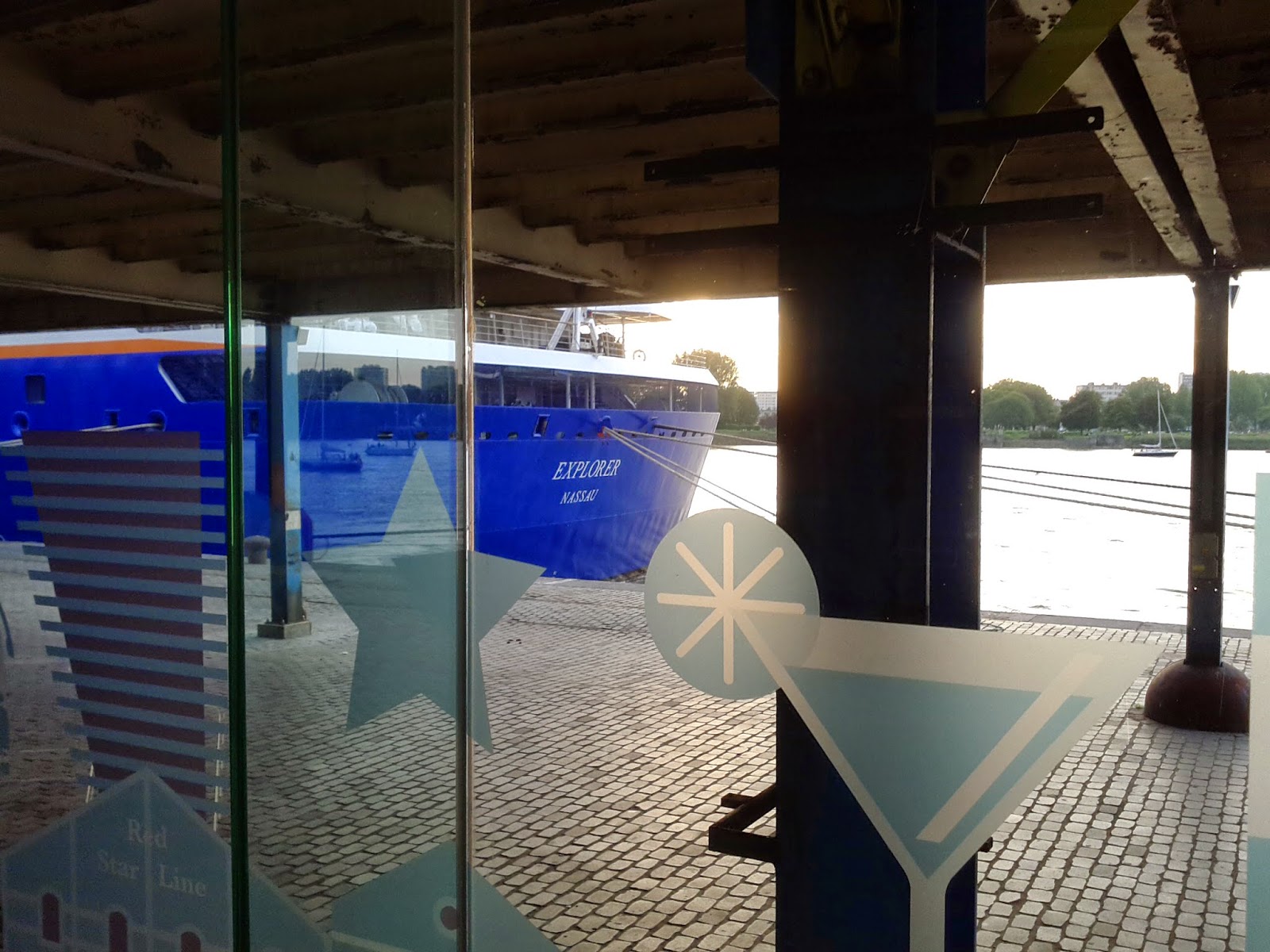 The rest of the pix are from Gdansk, Poland. In each country we've visited they've shown us pictures of the devastation of WWII, each country having been bombed or burned by another, and rebuilt in their own way.

Posted by CatherineWithC at 11:31 AM No comments:

Note: this post was started at least a week ago, but I have not been able to upload pictures and publish it. So here's the text, with pictures to follow when I can. We are now in Antwerp harbor, waiting to debark tomorrow (Sunday September whatever).

I am seeking balance on this trip. There's the physical phenomenon where you exit the ship with a field trip group, and you all sway through town knocking into each other occasionally, causing you to instinctively clutch your pack or purse against pickpockets. And there's the arrhythmia of the schedule: no days of the week, but A days, B days, at sea days, in port days, overland ports when you can travel on land or stay with the ship, and the chomping-at-the-bit IPADs (in port academic days) when you can see the town but not leave the ship. Today was one of those, followed by a rainy evening that's nice to watch from the cozy Glazer Lounge.

Sometimes my cabin window faces the dock and at other ports it faces the water. One thing I can count on is that I turn right out of my door to go fore and to the library or faculty lounge, and left to go aft to either dining room.

Library needs ebb and flow with the schedule, with a rush for travel guides as we approach a port, and faculty requests for help getting articles or films generally coming in the morning after we've finished at a port and are looking ahead to the next part of the syllabus.

Emotional balance is harder to pin down. I set a time to meditate but keep putting it off when I need to use the time for more mundane things like checking on my bills or seeking a good internet connection. Sometimes I take an organized tour in port, sometimes I have a travel buddy, sometimes not. I exhaust myself on port days because I don't want to miss anything! Then I am too tired to contemplate navigating a foreign transportation system on my own.

I have seen beautiful buildings and works of art and heard horrific stories of how incomprehensibly inhuman people can be. Yesterday to balance the lighter trips I've taken I visited the Sachsenhausen labor camp and the Holocaust Memorial in Berlin. The memorial was surprisingly haunting, given that it appears to be a random collection of stone blocks. But many of them are off-kilter, and the paths between them are rolling and leaning. 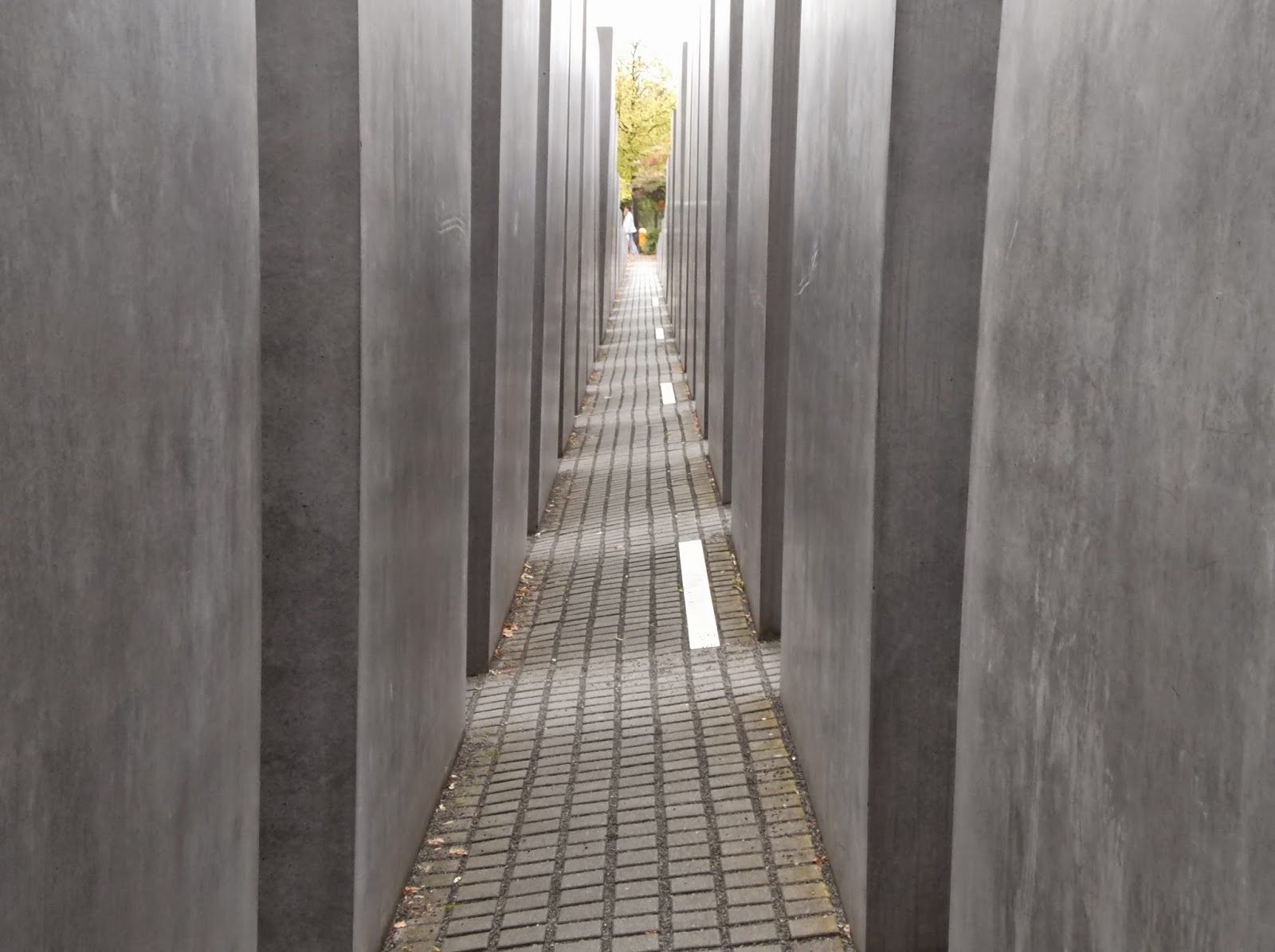 I'm trying out blogger.com after a couple of weeks of difficulty loading my own WordPress blog with the quirky internet access on Semester at Sea. Hoping to transfer over from floatinglibrarian.wordpress.com.
Posted by CatherineWithC at 8:02 AM No comments: